Coroico to Sucre – A serious mission

We took a combi from Coroico to La Paz (20Bs / $2.90ea). Somehow we got stuck in a traffic jam leaving town which added 30-60 minutes onto our travel time. It would take us the best part of 3 hours to get to La Paz. When we got back to La Paz, there was confusion as to what bus station we were trying to get to. Apparently La Paz has several and that can change the cost of a taxi anywhere from 20-80 Bs ($2.90-$11.50). We struggled to identify the correct combi and since we had all of our stuff, decided to go for the taxi.

Arriving into the La Paz bus station we began a brief task of cost and time for overnight buses to Sucre. Our game plan was to book last minute, but we wanted prices and times first. It seemed like most would leave between 6pm and 8pm and costs ranging from 80-200Bs ($11.50-$29).

Toby then had to make a visit to the death road travel agency (Gravity) because he’d left his thermal top somewhere on the bus. Sadly this mission would fail as it wasn’t found. Chalk this up as something else left on a bus. To make him feel better and carry the birthday theme, he bought a delicious piece of cake (5Bs / $0.70).

We would then buy tickets on a bus to Sucre leaving at 6.30pm (60Bs / $8.70). The various claims of economic (regular seat), semi-cama (small bed) and full-cama (big bed) were all various levels of lies. We ended up getting lucky where our semi-cama bus was cancelled and upgraded for free to full cama leaving an hour later. Overnight buses sound good, but really the next day you are tired and don’t have much energy to do anything.

Our bus would arrive into Sucre after 12 hours of travelling at somewhere around 9am (24 hours non-stop travelling at this point). The terminal is about 2km from the centre of town, but easily walkable. We got lucky and had a tout gives us a good deal on a room at 80Bs ($11.60) for a private with private bathroom, hot water, wifi, personal fridge, amazing rooftop terrace and cheap beer. The place is called Villa de la Plata and is on the street Aniceto Arce about 2 blocks from the central market.

Sucre is a city of around 200,000 and with its UNESCO heritage listing; the city centre is quite appealing to the eye. The city is very popular with tourists looking to learn Spanish. It is also well known as a town to just chill out in for a few days.

We had come here for the main reason of trekking with Condortrekkers. They were formed by the same people as Quetzaltrekkers, who we volunteered with in February 2014 for 6 weeks (see our blog posting). We got this organised straight away and would not be leaving for a couple of days.

With some time to explore Sucre, we checked out the central market for lunch. We then did our own walking tour including up to the viewpoint next to the Church of Recoleta for sunset.

The view from Recoleta

Toby had heard of the Dinosaur tracks near to Sucre and went on an adventure in search of them. With some rough directions you take a combi (1.5Bs / $0.20) from the central market to a cement factory. It’s a city tour in itself as the combi takes 30 minutes crawling through traffic blocked streets to get there. The locals don’t seem to know what Cal Orko is, so the name El Parque or Parque Cretacico will get you going in the right direction.

If you have no interest in Dinosaurs then this is not the place for you. It was first discovered in 1985 by workers at a cement quarry. It was once a lake bed which dinosaurs walked on, leaving their footprints. It is now a huge wall angled at 73 degrees, due to movements in the earth like the creation of mountains. The wall is roughly 80 metres high and 1,200 metres long. Online research seems to suggest there are more than 5,000 tracks of nearly 300 species of dinosaurs.

The absolute key to this excursion is a new tour that started in August 2014, where you get to be right up next to the tracks and the wall. This is only available at 12pm and 1pm each day and lasts for 1 hour. Bring some comfortable walking shoes as you need to hike down and back up on some fairly rough trails. If you miss these tours, then you can only see the wall from a viewing area about 300 metres away, which really isn’t all that good.

The entrance costs 30Bs ($4.35) plus 5Bs ($0.70) for permission to take photos. This includes the cost of the walking tour along with a movie theatre and some life size replicas of many dinosaurs.

It’s hard to capture the views through photos, but it will give you an idea of what to expect. The fact that these prints have existed for 60 million or more years is what is truly mind blowing.

Parque Cretacico – Standing next to footprints

Parque Cretacico – Up close with a hand next to a footprint

As we mentioned earlier in this post, we were extremely keen to get on a trek with Condortrekkers and ended up on a 3 day trek to see the Inca Trail, Maragua Crater & Dinosaur Footprints. We would meet at the Condortrekkers office at 6.30am and get on a private bus out to the start point at the town of Chataquila (elevation 3,650m) where we would eat breakfast (with some extra delicious cake). We would also meet our other trekkers; 3 American women, 1 Swiss woman, 1 German man and the two of us and our guide and chef Jonnie who spoke great English.

Starting point for trek at Chataquila

With everyone fueled up with food, we set off at around 8.30am into the unknown. The scenery was instantly impressive and with no other tourists or people, the setting was pure bliss. The contrast of blue sky, red earth, green foliage was really eye catching the whole way.

Most of the morning would be downhill with a couple of rest stops for snacks, water and shade.

The lunch stop was a well hidden waterfall. We chose against a full swim, but we did dip our feet to cool off from the hot sun. While we relaxed, our guide, Jonnie was preparing a gourmet picnic lunch.

While we were eating, a frog jumped up to Toby and hid under his foot. He stayed there for more than 5 minutes before deciding to move on.

The hike out of the waterfall and the next hour in the sun was quite grueling. We think we’d all eaten too much food which slowed us down. Luckily Jonnie realised this and we had frequent rest stops in the shade and also to enjoy the sensational views.

There were a few narrow cliff crossings to add to the fun of the trail.

We made it to the Maragua Crater at around 3pm and discovered our amazing overnight accommodation. It seemed like luxury to us with running water, electricity and comfortable beds.

After relaxing for a little while, we were off again to look at the Garganta del Diablo (translated: throat of the devil). This is a great rock formation that looks like you’re inside a skull.

We would then go to the local school that Condortrekkers helps with money and other support before returning to our accommodation for a tasty dinner and some card games.

The morning started at 7am for a tasty breakfast of oatmeal and fruit and starting to hike at 8am. This would be a little tough at the start as we hiked the 300m of elevation out of the crater but with stunning views.

Our first major stop of the day was at the dinosaur footprints, the perfect time for some silly photos.

The lunch spot was at a tiny town which was mostly just a school from what we could see. The kids knew that tourists brought food and were soon near us asking for things. Luckily we had finished eating, so we packed up and moved on to get back to our serene hiking,

It was only a few hours more walk until our overnight town of Potolo, but the colours again were amazing. We were also followed closely by a group of black clouds and the sounds of thunder. This proved to be great motivation to walk faster and get to shelter. Luckily we would be inside for maybe 15 minutes before the clouds let out a hard shower of rain.

Dark storm clouds on the horizon

We would play cards for a couple of hours until the weather cleared and then explore the town before the sun had set.

The accommodation again was comfortable and nice but with the bonus of hot showers which we took advantage of.

This would be an early start as breakfast was served at 6.15am and we needed to be on a 7am bus back to Sucre. The morning colours at the town square were great as the sun rose.

We would be back at Condortrekkers at 10.30am. Enough time to do some errands and shopping at the market before having our included lunch at Condortrekkers. This would be a delicious quinoa soup, vegetarian lasagne and a cupcake for dessert.

The trek was really fun and the landscape was very different to virtually anything we’d seen at all on this trip. There was a huge amount of great food and the group of people we were with were fantastic to spend time with.

Remember that Condortrekkers is a not-for-profit and doing great things for the local community.

This site uses Akismet to reduce spam. Learn how your comment data is processed.

This entry was posted on September 5, 2014 by Tora Traveller in Bolivia and tagged Bolivia, condor trekkers, dinosaurs, Sucre. 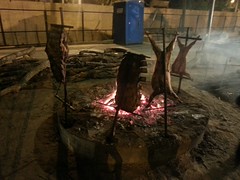 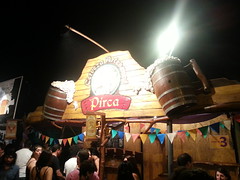 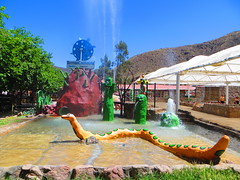 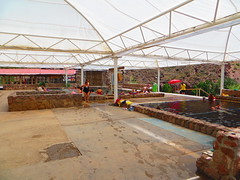 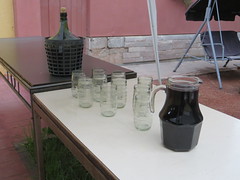